A shortish walk this week as the island was in the grips of Storm Callum. It was extremely windy on the tops but the rain held off for the morning which was nice of Callum.

Starting from the car park at the bottom of Ballaugh plantation we headed up the track to Glen Dhoo, one of the island’s hidden treasures. 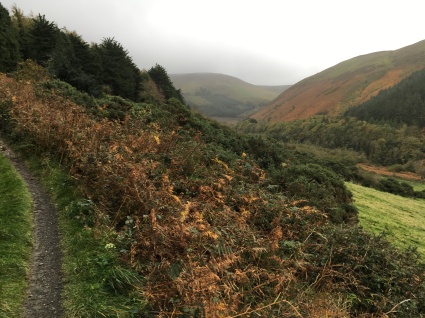 On crossing the stream at the old farmhouse we followed the track indicated as a greenway. Why they bother to do so is a mystery to me as it ends after a few hundred metres at a gate, goes through a nature reserve and can only encourage off-road motor cycles to push on past this point onto the hills. There used to be evidence that they came down this way with some significant scarring on the hillside along today’s route but this does seem to be recovering.

Anyway, past the farmhouse there are a few other buildings, one looks like it used to be a mill.

We then crossed the stream on the left and picked a path through the bracken until we were climbing up next to the stream at the left hand side of the plantation. 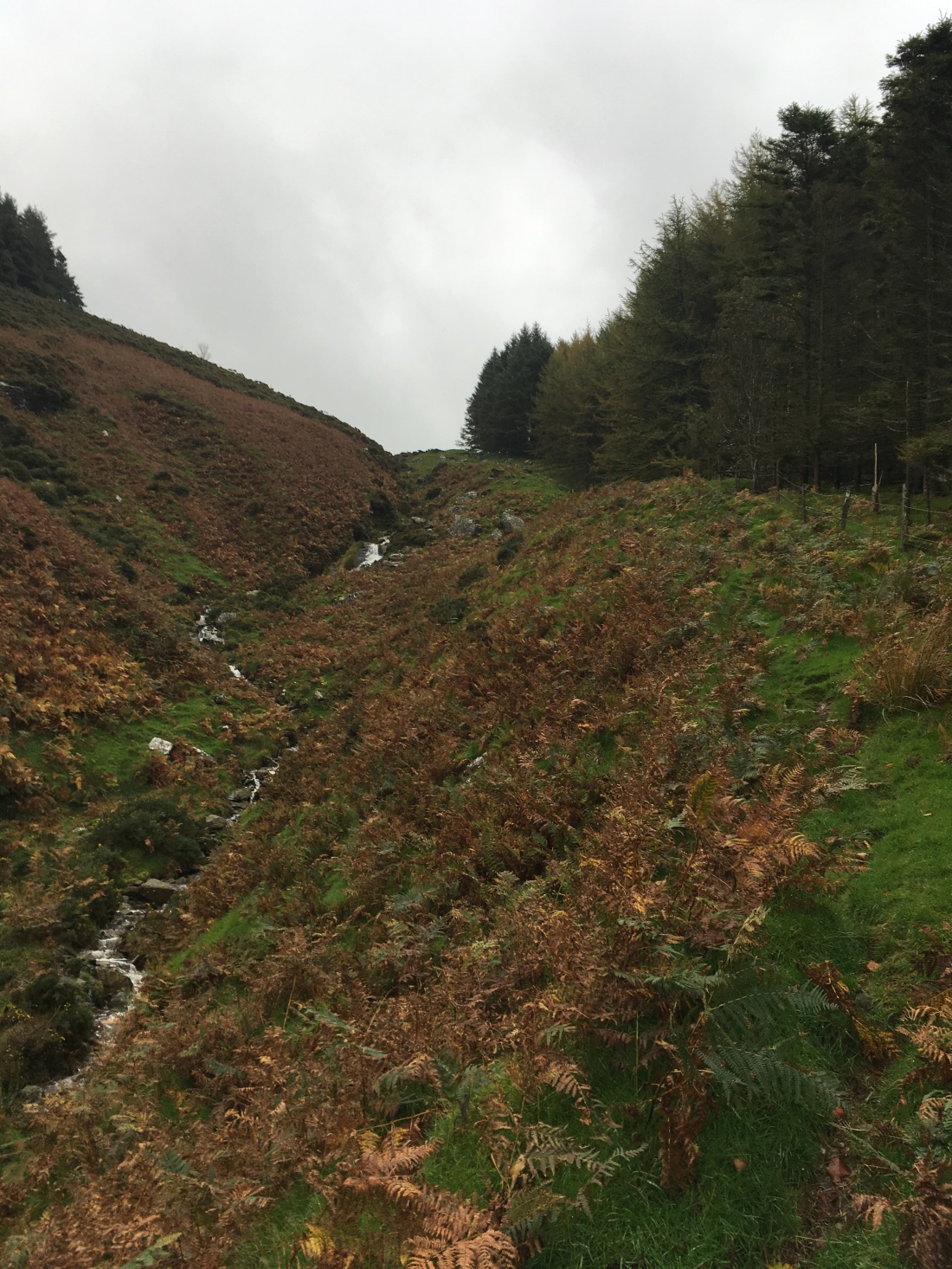 There is a faint path up the right hand side of the stream, climbing steeply by the edge of the plantation. The views back down to Glen Dhoo are excellent. 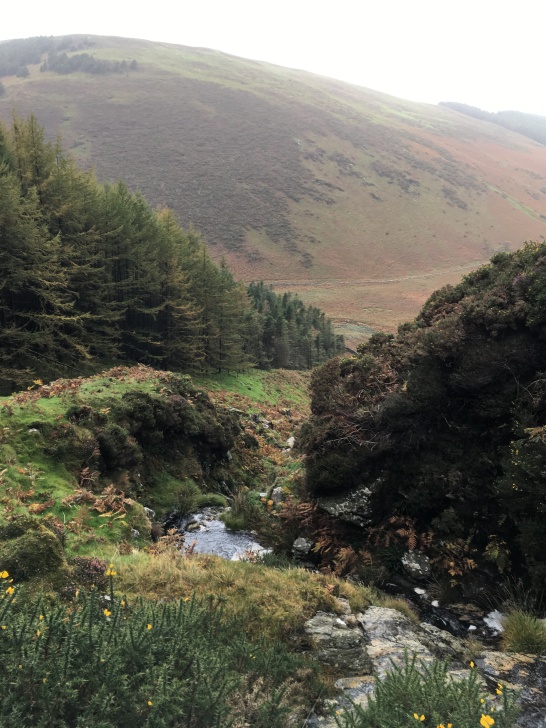 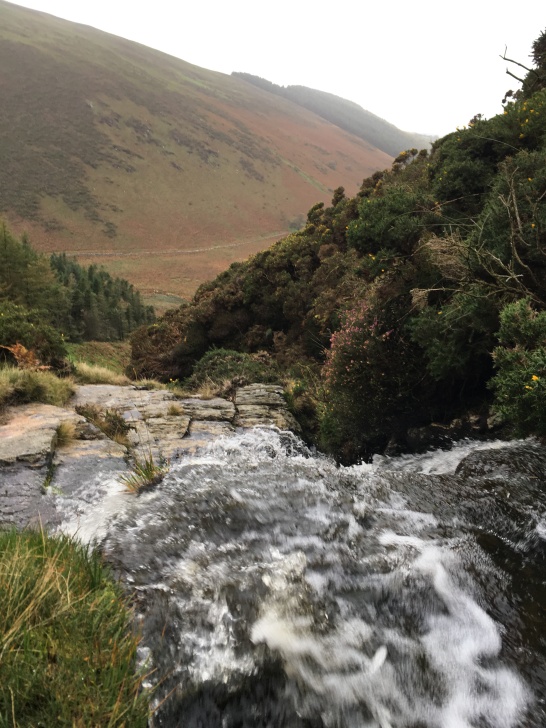 Eventually the gradient eased as we entered the upper ‘corrie’ which contains a few lively streams and a mixture of heather, bog and grass.

We chose a spur between two stream to follow to the upper slopes, passing a curtain of fresh water coming form the soaking turf.

The final climb was hard work across heather with the wind now buffeting us and slowing progress. There was just about a view towards Mount Karrin, but the mist was descending and the wind roaring. 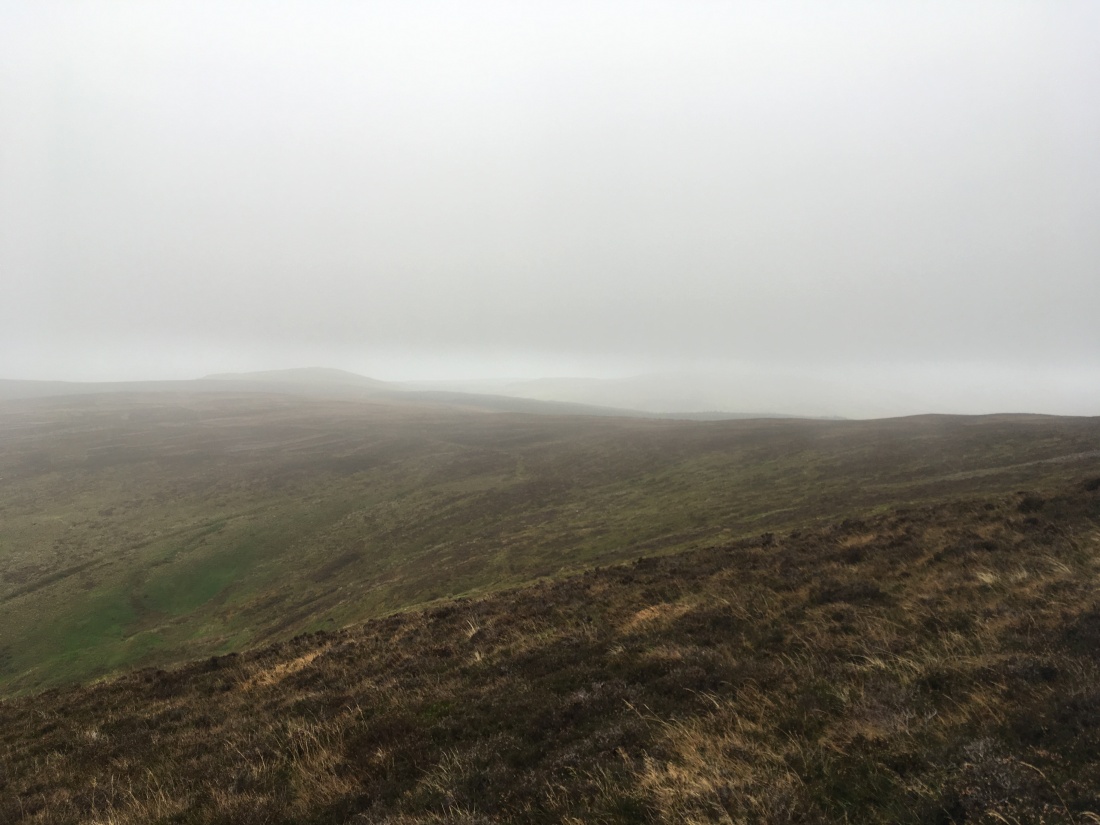 At the summit it was hard to stand, certainly hard to hold the camera still…..

Fortunately there is what seems to be an ancient quarry at the summit so this provided some shelter for a quick brew.

The surface of the nearby pool was very choppy due to the wind.

Continuing past the pool we descended the SW slopes and climbed a little to the track and followed it to the top of the Baltic road from Kirk Michael. Here we turned right to follow the greenway towards Slieau Curn. Despite measure to control erosion it is still very rutted. 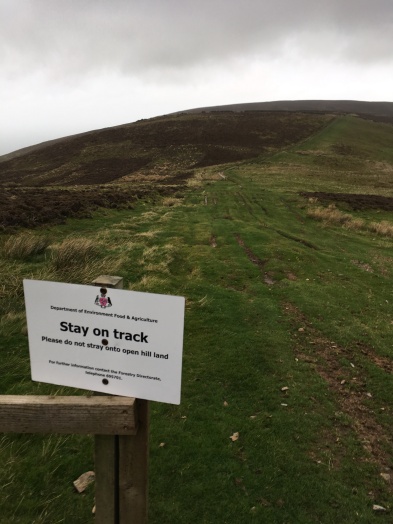 We left this track and headed up the slopes to the top of Slieau Curn where if anything the wind was even stronger. The wooden post seems to have fallen and now there is a rocky cairn marking the summit. 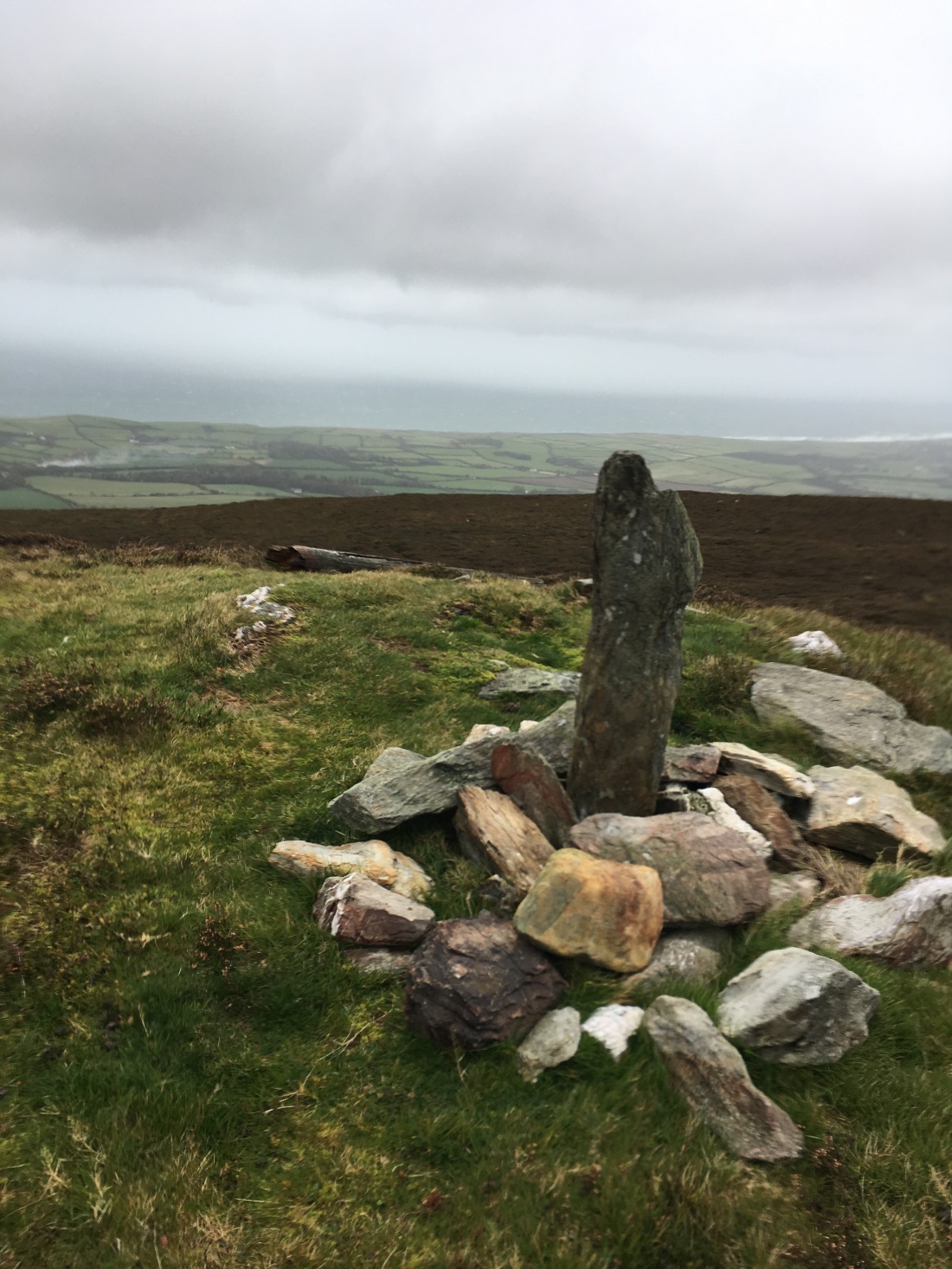 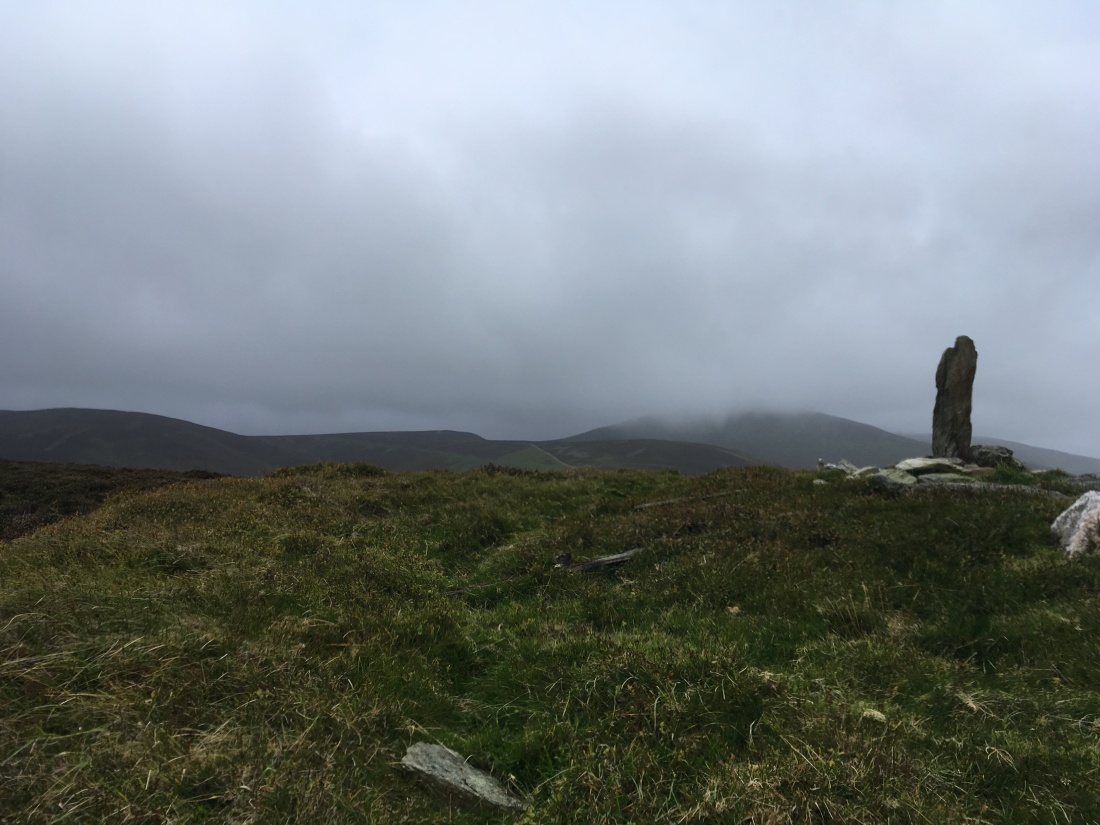 After a short break we picked a line down the NNE slope to the top of the Ballacob track. 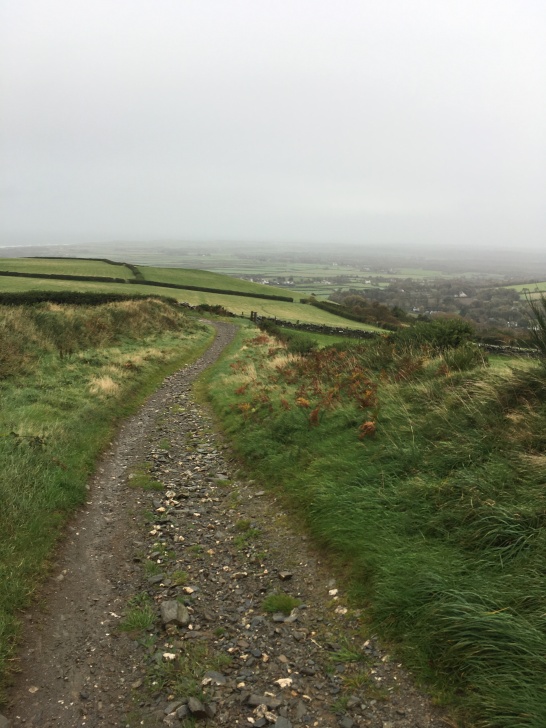 Following this down hill to the first corner we turned right onto the permissive path which heads back to Glen Dhoo farmhouse along the bottom of Slieau Curn plantation. There is no clue that this path exists from this direction, only half way along it do you come across a gate which tells you that it is ok to come this way. It is more obvious in ascent. This is a lovely track (though overgrown at the Glen Dhoo end) and good to see that some landowners are willing to allow access to their land. 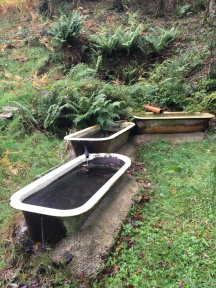 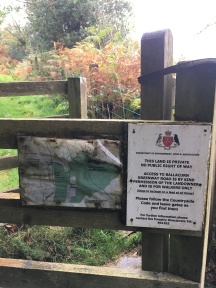 Once back at the farmhouse we retraced our steps to the car. 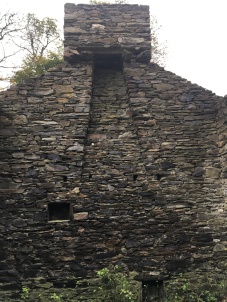 Another fine walk in lively weather – it’s alway worth going out!

This one was just 9.4km and took us three hours. 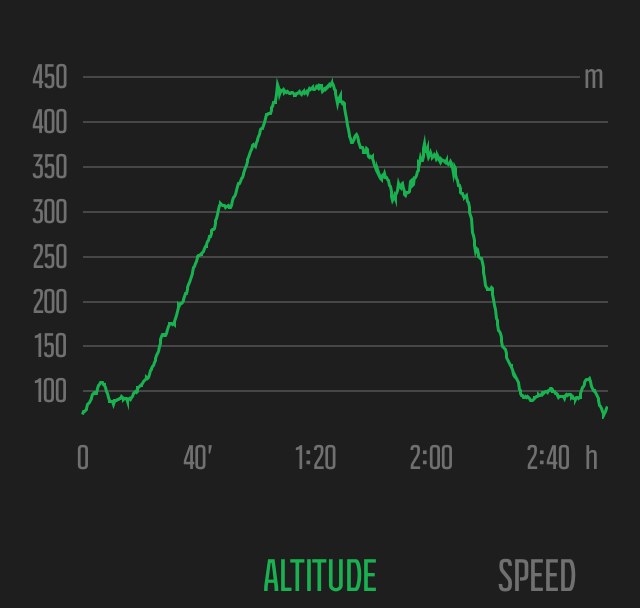