I have always climbed Carraghan from the Brandywell Road but to do it justice and to complete a circuit of the skyline above Injebreck reservoir I wanted to find a way up Injebreck plantation onto Carraghan, over to Being-y-Phott and then along to Slieau Maggle and Colden before descending through Colden plantation back to the starting point.

This aim was more or less achieved in a walk of some 15km in four and a bit hours.

We had some trouble finding a way up as described but i have since been back to have a look around and the following route through the plantation seems to be best:

Leave the road via a stile on the east side of the road between the car parking area ad the small waterfall on Colden River. The track goes over a bridge and briefly follows the river before climbing to a locked gate. 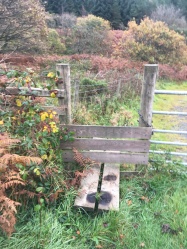 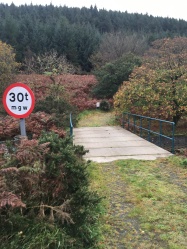 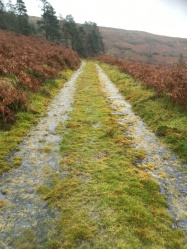 After the gate the track climbs into the plantation, soon reaching a clearing with stacks of logs and a felled area above. Just after the logs cross the ditch and find a faint fell runners track in the trees. This goes up very steeply to a clearing, heads right to the side of a fence and back into the trees.

At the top there is a stile, presumably for the fell run, which leads onto the open hill side.

Once on the hillside proper there was a good sheep track / path all the way to the summit with superb views back over the reservoir and to Colden.

The true summit is the first one reached from this direction. 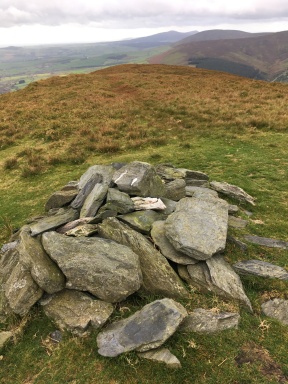 The light on the sea over Slieau Lhost caught my attention.

As did the light in the East Baldwin valley.

The way ahead to Beinn-y-Phott is simply to follow the ridge and drop to the gate on the St Luke’s track. From there Beinn-y-Phott is easily ascended by a variety of routes. We kept to the south side and found some rocks to follow up to the summit. Carraghan and Being-y-Phott both lie on the central ridge of resistant Barrule Formation and so are nice rocky summits, unlike the rest on this walk.

We then headed back towards the upper section of the St Luke’s track and followed it to the cattle grid on the Brandywell road. Form here it was a road walk until we found ourselves on the slopes of Slieau Maggle. Of course the ideal way would be to traverse the top of Injebreck Hill but fencing prevents access at both ends of this potential route.

Slieau Maggle is not the most interesting of hills but does provide good views to the west.

From here we headed south west to the gates and track junctions above Slieumaggle Plantation (as it is named on the IOM Leisure map).

We followed the track that eventually drops to Crosby via Cronk Breck but cut off to the left to gain the summit of Colden. This hill is quite undistinguished form this side but on it’s eastern flank holds a decent corrie, a circuit of which form Injebreck is quite satisfying except for the struggle up the southern side through felled forestry.

The summit of Colden is marked by a post and a cairn on which was sitting the remains of the beacon once supported by the post. 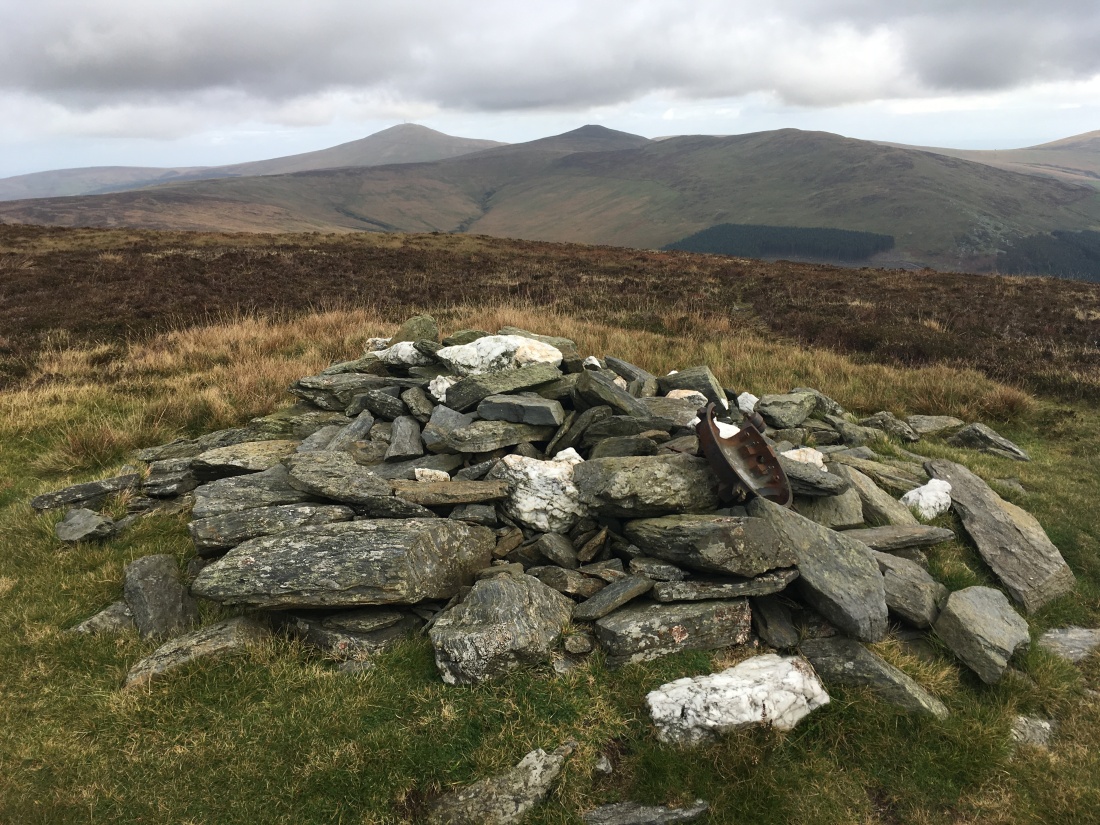 From here nearly the whole of the route was on view – a fine circuit apart from the Brandywell Road section.

Descent was by the northern rim of the corrie, a nice path follows a developing ravine until it reaches the track comes directly from the gate mentioned before. 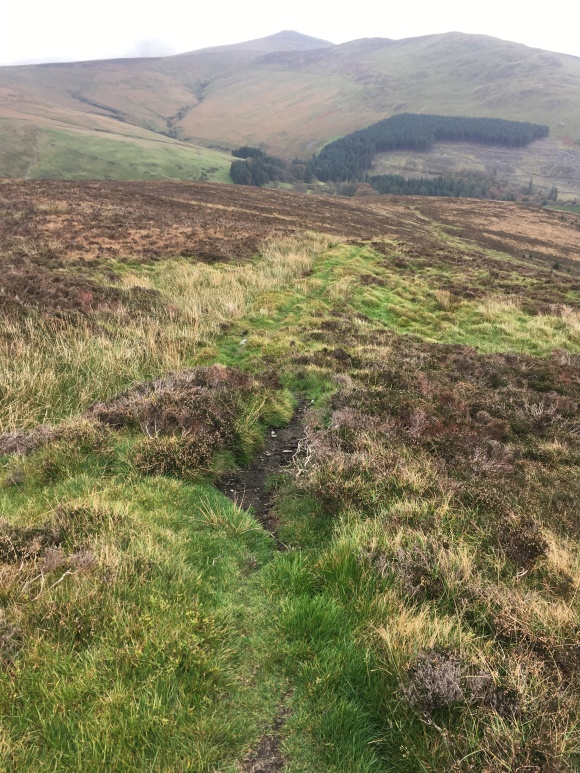 This path was then followed around the inside of the corrie, traversing a series of boards over the boggier sections and passing a fine bench with a fine view. 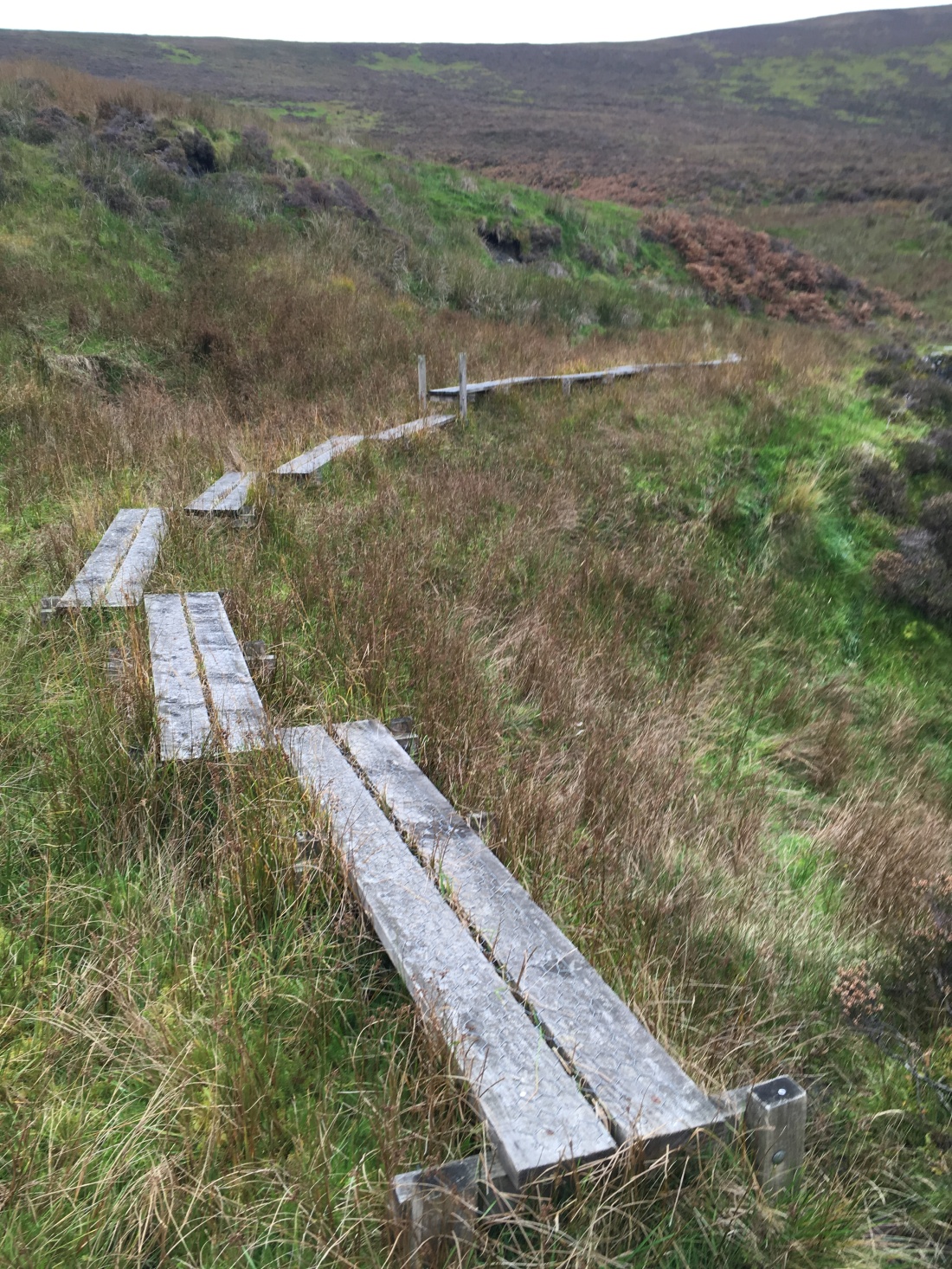 Following the main forestry track took us straight back to the car and then end of an excellent walk. 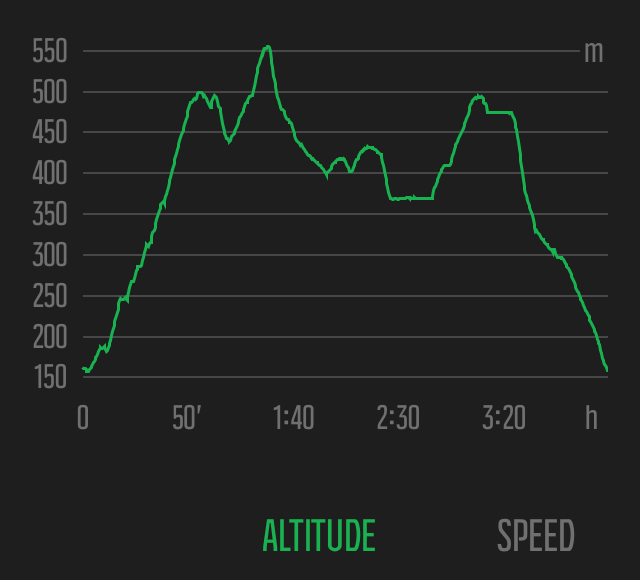