Having climbed both of these hills, in particular Slieau Freoaghane, many times from Brandywell and Kirk Michael I thought I would do something a bit different this time and start from Montpellier Wood on the Druidale road.

Gales and showers were in the forecast as I parked at Montpellier and tired to locate the more northerly of the public rights of way marked on the maps.

I tried to pick this path up from the ford but in retrospect realise I should have walked up to the tholtan. I followed sheep trods and eventually crossed to the wall and fence where I found the correct path. 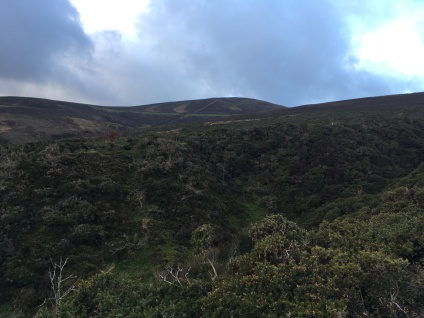 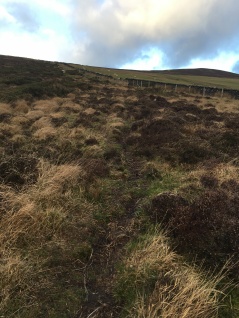 Here a stile took me to the space between the wall and fence but soon another returned me to the left of the fence and that led to a broken stile onto the main greenway track running north below today’s two hills. 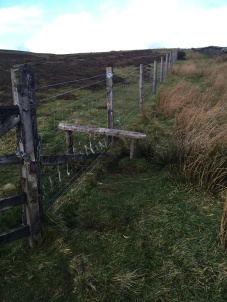 Views to Snaefell and the North Barrule ridge were excellent and would stay with me for much of the day.

I passed through the gate on the track and turned immediately left onto the path now closed to vehicular traffic which runs between Slieau Freoaghane and Slieau Dhoo towards Kirk Michael.

This path is at first rutted badly but the walking improves as do the views over the west coast and Slieau Curn.

Suddenly the sun came out and the colours all changed.

At the path junction I took the left turning, the top of the Baltic track down to Kirk Michael.

After a short distance I turned left over a stile onto the small path heading down into the ‘lost valley’.

This fine path rounds the shoulder of the hill and reveals the most dramatic side of Slieau Freoaghane.

That hill was for later, however, and I descended to the old mine buildings by the stream in the valley. 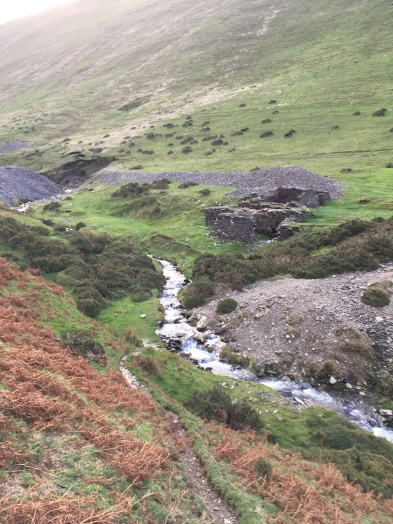 This is a fine spot, especially now the hillside is recovering from the motorbike tracks that used to scar it.

Two tracks leave the mines. Previously I have taken the higher one onto the shoulder of Slieau Freoaghane and climbed it that way but today I followed the lower track, contouring above the reservoir (an ideal small scale hydro plant for the farm below surely?) and branched left following the fence and the track shown on the maps. 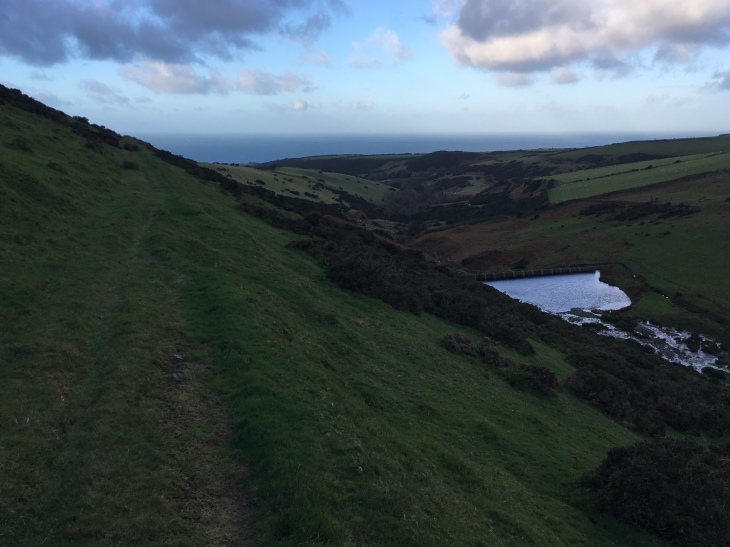 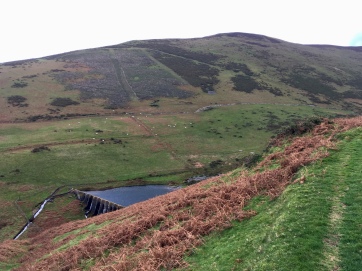 The path became clearer after passing the first stream and after the second it started to climb up towards the ruin between Freoaghane and Sartfell. 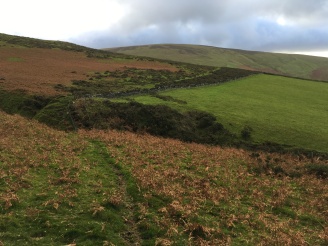 In the past I have gone as far as the ruin (and old mill?) before heading over to Sartfell but today once above the D shaped sheep fold I followed sheep trods down to the stream and picked up the diagonal line visible on the next photo.

Sartfell always seem like hard work whichever route you take. This one was harder than most so I had a break for tea before climbing into the gales at the top. 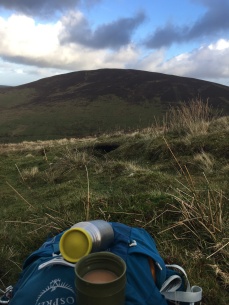 The top of Sartfell is a bleak place, bare and stony in places with one part fenced off for no apparent reason.

The summit is marked by the customary telegraph pole. The views were very fine especially to the north east. 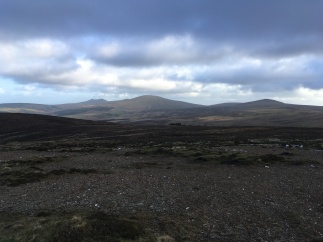 I descended easily to the path just above the ruin, crossed straight over it and followed a faint path towards the summit of Slieau Freoaghane.

Another break here in the shelter of the cairn and intermittent sunshine gave yet more superb views. This really is one of the best Manx summits.

The descent north is easy giving a fine view over Slieau Curn and Slieau Dhoon and then back down into the ‘lost valley’. 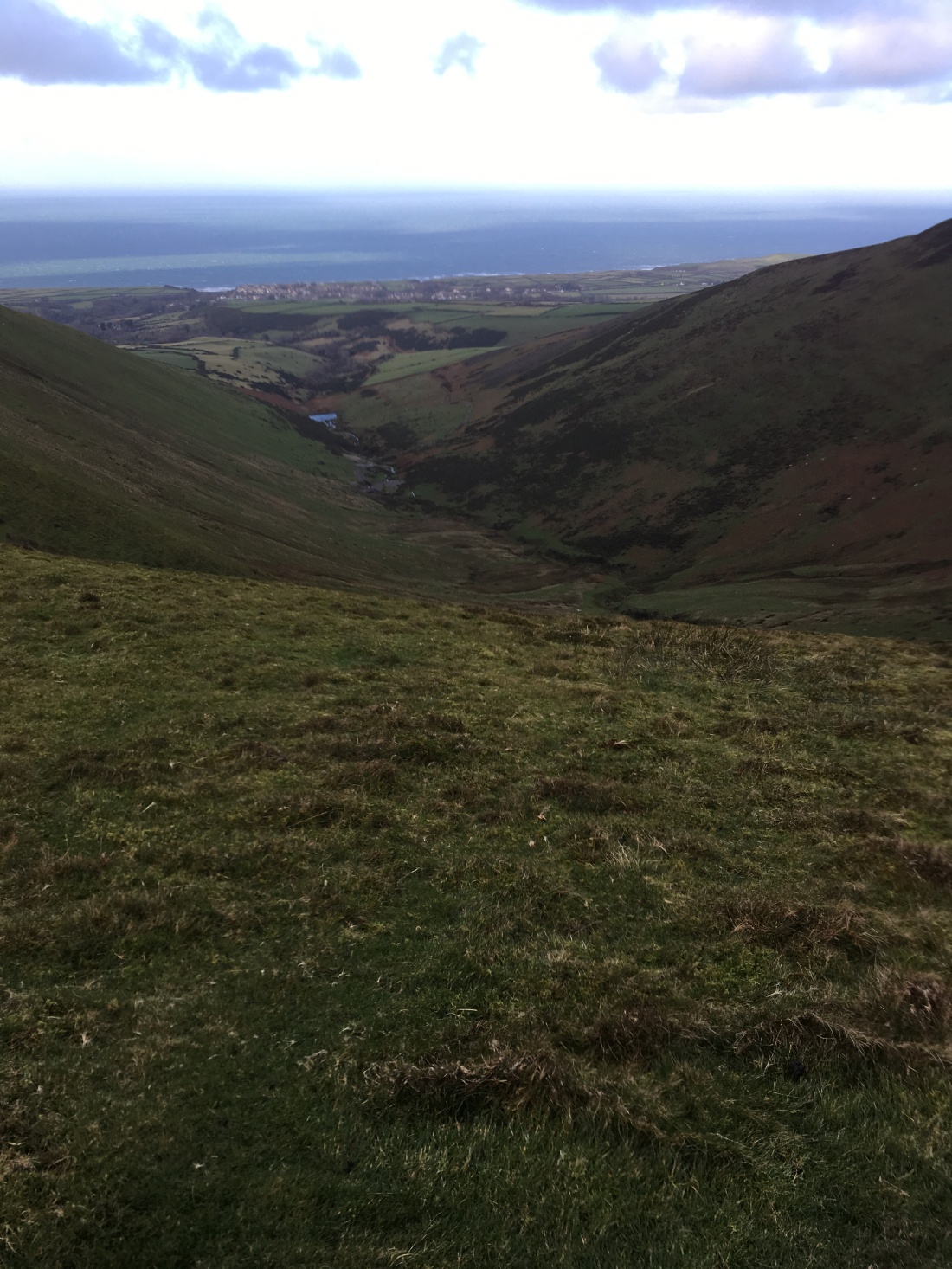 The wind here made it difficult to stand but I was soon on the stone track, temporarily heading south before taking the main track to the left. 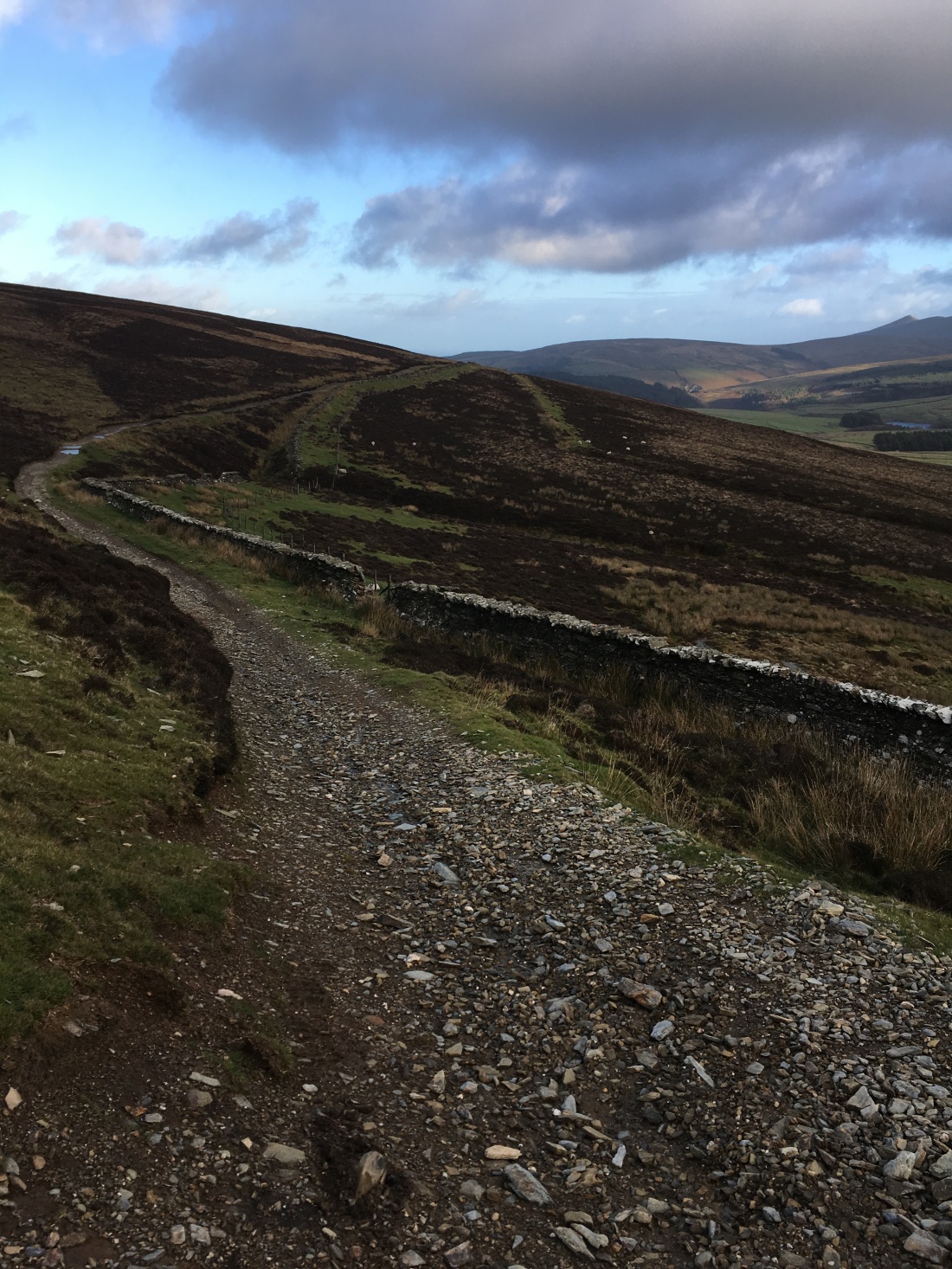 After crossing the stream the map shows a public right of way turning right of this track back down to Montpellier. It is easy to miss – I certainly did and back tracked to find a stile. There is not footpath sign and once on the other side of the stile no path. 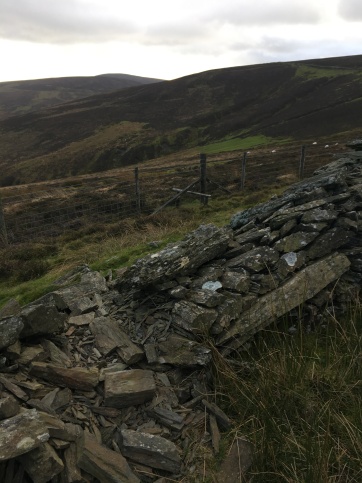 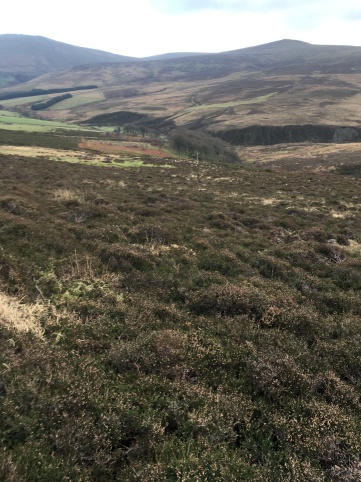 After battling through heather I entered an area of small beach trees (an extension of Montpellier?) and then out of the blue picked up footpath signs. There must be a path here after all!

I soon entered the very fine beachwood and descended back to the Druidale road and the car. 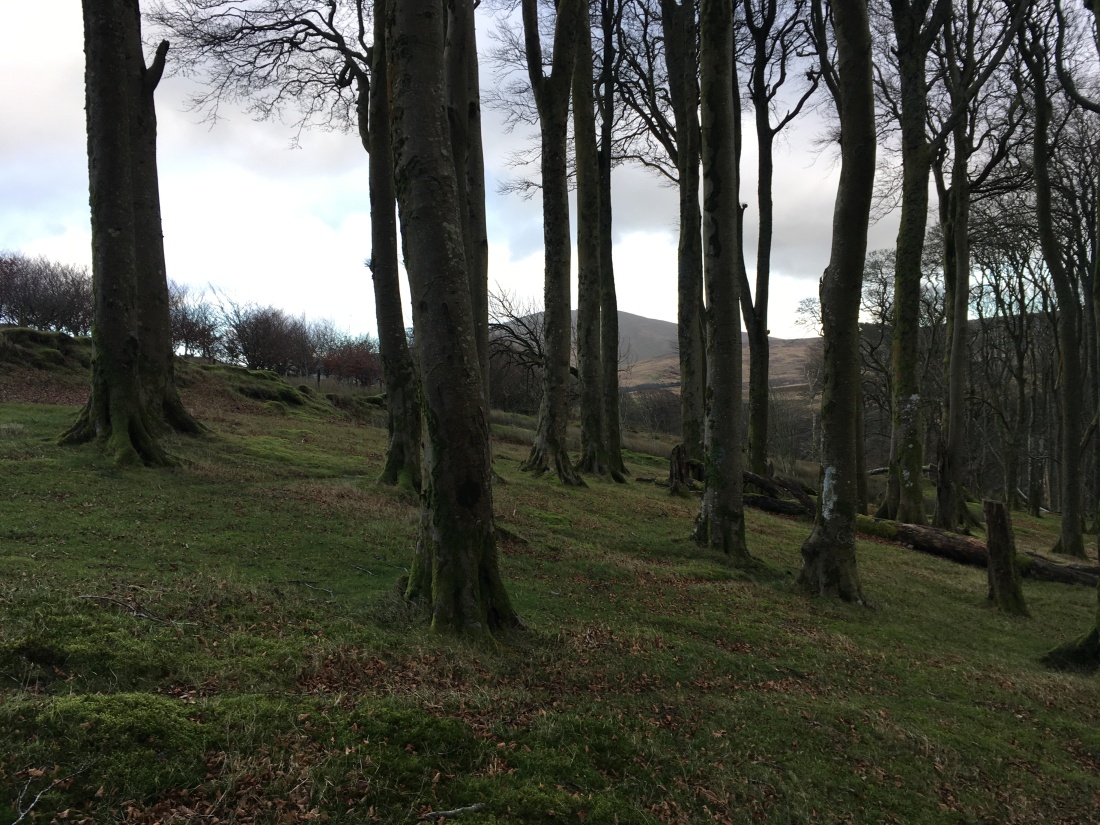 Another wild day (though it did stay dry) and another fine walk in good rambling country. 11km in 3 hours (quite a lot of ascent on this one – 735m). 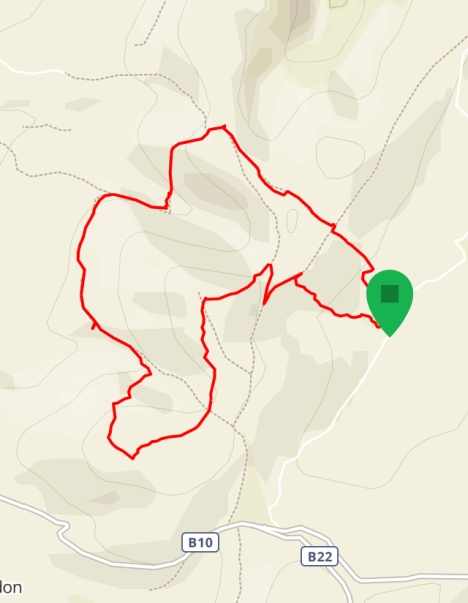